Syracuse Community Geography is a university-community collaboration that uses GIS mapping and spatial analyses to provide fresh and insightful perspectives on social issues. We are committed to addressing community challenges that relate broadly to the themes: 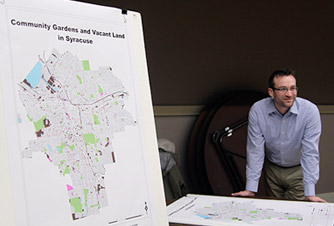 We empower communities – from neighborhoods to regions – to use maps and spatial analysis to better understand their social landscape and to build a more just society.

Geography is critical to understanding people's connection to their social and physical environments. We seek to make the knowledge and tools of geographers relevant and accessible to everyone.

Our research addresses questions relevant to local communities. Our process ensures that all participants both contribute and gain knowledge and skills. Our results inform action.

The impetus for creating Syracuse Community Geography came out of a partnership between members of the Syracuse Hunger Project and the Syracuse University Geography Department. In 2003, Dale Johnson, former director of the Samaritan Center, approached SU Geography Professor Don Mitchell to inquire if the Geography Department could map the community’s emergency food distribution network in conjunction with people living in poverty and other factors that may indicate people are hungry. The Syracuse Hunger Project was initiated by Johnson to provide a forum for dialogue among the city’s emergency food service providers. Johnson was concerned that because so many different service providers operate in isolation, that they collectively had little knowledge of the big picture of hunger in the area. Johnson was interested to know if geographers could provide a view from “10,000 feet up”. Mitchell put Johnson in touch with Professor Jane Read, who incorporated the request into an introductory GIS course. Students in the class used GIS to map families living in poverty, social service program recipients, food pantries, soup kitchens, youth and elderly food support program locations, and analyzed patterns to shed light on the geography of need and emergency food provision.

When the analysis was complete the Syracuse Hunger Project hosted a town hall style gathering to publicly announce the results and recommendations. Service providers, community residents, activists, academics, and the media attended. In addition, a final report was issued in April 2004 by the Syracuse Hunger Project. Among the many recommendations issued was one that encouraged the SU Geography Department to create a permanent initiative to provide GIS mapping assistance to community-based organizations that could benefit from geographic analysis of a broad spectrum of community issues. Soon thereafter, a core working group of Geography Department faculty, Syracuse Hunger Project participants, and a local charitable organization created a Community Geographer staff position at Syracuse University. They hired Jonnell Allen Robinson in 2005 as the first Community Geographer. Plotting a Course for Community Geography

In her first year, Robinson continued to work with members of the Syracuse Hunger Project to further analyze hunger and began creating the framework for the Syracuse Community Geography (SCG) program with the help of her advisory board. She also tackled new community-driven projects including an analysis of youth programming availability and created an interactive mapping tool for the community (MapSyracuse). Since 2005, Syracuse Community Geography has worked with more than 100 community organizations and coalitions on issues ranging from safe routes to school to hydrofracking. In the process, new and lasting collaborations have been created, new ways of understanding significant community problems have evolved, and real changes have been made. Community partners report that over the four years between $3.5 million and $4.5 million dollars in new grants have been secured due in whole or part to SCG analyses. In 2008, Robinson helped members of the Syracuse Hunger Project to create Syracuse Grows – an urban community gardening and food justice organization. Robinson served as chairwoman for the all-volunteer group until 2012, during which time several new urban gardens were established in low income neighborhoods.

SCG also trains youth, government, school district and nonprofit agency employees, as well as SU faculty and students to use GIS, GPS, Google Earth, MapSyracuse, and to conduct geographic research. Workshop evaluations show that the trainings improve participants’ ability to comprehend complex social and geographic information and equip them with tools to better address community problems. SCG has become an important source of capacity building in the community. Putting Community Geography on the Map

Another momentous milestone was achieved in 2010 when Robinson successfully defended her PhD dissertation research. Her research evaluated the contributions of SCG to the community and university. Soon after, the Geography Department, Chancellor’s office and the SCG advisory board decided that bringing SCG more formally into the teaching and research fold of the department and university would further expand its impact on community groups and students alike. A faculty position and graduate research assistantship in Community Geography was created, enabling Robinson to develop community geography courses and to recruit graduate students interested to pursue research in this growing field. In 2013, the Syracuse Community Geography Program was rebranded: we launched this great new website to showcase projects and to share maps and data. Student involvement continues to grow through our new internship program, courses and the funded graduate research assistantship. We look forward to making an even bigger impact in the years to come.